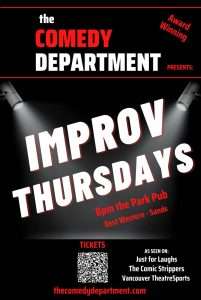 Start your weekend early ! Come down to a cool specially curated speak-easy style room in the back of The Park Pub at the Best Western Sands on Davie Street and see award-winning comedy featuring some of the best improvisers in North America! If you love Whose Line Is It Anyway, you’ll love this show.

Get in the holiday spirit and start your weekend early !

It’s candy cane chaos and mistletoe mayhem in this fast paced improv comedy spectacular! With Santa finally taking a year off to work on his tan in Palm Springs, the North Pole’s top three elves duke it out in a merry-making Christmas comedy competition. Who will get the coveted position of squeezing down the chimney and bringing joy to children all over the world? Only the dutiful employees at the North Pole (the audience) will have final say on which elf slays the competition and gets to drive Santa’s sleigh on Christmas Eve!

This show is sure to delight and deliver hilarious holiday punchlines.